The General Effects of Aspirin and Cancer Clinical Trials
By Ms. Elana Meer (Princeton University) | CERI Research Team
More details of this article can be found in our JSCR - November 2014 Issue 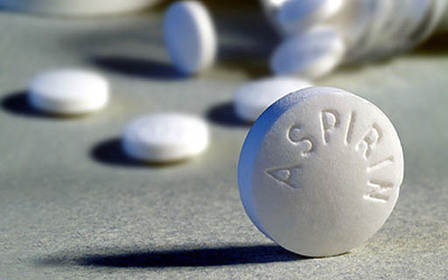 Inflammatory Responses
One of the major hallmarks of cancer is inflammation, part of the body’s immune response to foreign pathogens, damaged cells, and other irritants. As a mechanism to heal damaged tissue and get rid of infection, inflammation tends to involve greater blood flow to the tissue in a particular region causing increased temperature, redness, swelling and pain. As part of the immune response, inflammation also increases levels of mitosis, the cell division step of cell growth. With the production of more cells during mitosis, there is a greater probability of cancerous mutations that may lead to significant tumor growth. Similarly, during inflammation, reactive oxygen species (ROS), agents capable of damaging DNA, are released into the blood stream and surrounding cells. Likewise, apoptosis - the programmed death of damaged cells - tends to be significantly reduced in inflamed tissues. Therefore, cells with genetic mutations may develop into full cancers instead of being naturally killed off. Overall, chronic inflammation can have deleterious effects, as it may cause the formation of new blood vessels, increase the chance of DNA mutations, and ultimately promote tumor growth. 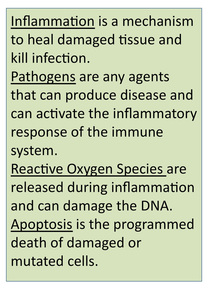 Aspirin Mechanisms
Over the past couple of years, Aspirin has come into discussion as a potential cancer therapy. Aspirin blocks inflammation by inhibiting the activity of COX-1 and COX-2 enzymes, important in mitigating the inflammatory immune response to tissue injury or infection.  By blocking COX-2 enzyme, also involved in pain, aspirin has additional benefits associated with pain reduction. Through this mechanism, Aspirin seems to be a promising treatment for cancer prevention, although the experimental results are not definitive. Research has shown that regularly taking aspirin may reduce risk of death for gastrointestinal, bowel, colorectal, lung, prostate, ovarian, and even brain cancers. Other studies have shown that large doses of aspirin, taken consistently for multiple years, is necessary to have such a positive cancer reduction effect. This may have dangerous implications, as aspirin can cause side effects of bleeding in the stomach and gut that increase with age and with quantity of aspirin taken. There are still outstanding questions: At what age people should start and stop taking aspirin? What should the dosage be? What risk factors may exist and how are they determined?

Clinical Trials and Current Research
In addition to independent research studies, the National Cancer Institute is funding clinical trials to show how aspirin reduces the recurrence of polyps, extra pieces of tissue that grow on the lining of certain organs that can become cancerous. Early observational studies have shown that people who consistently take aspirin are less likely to get colorectal adenomas, abnormal growths that may launch the development of colorectal cancers. The ASPREE Cancer Endpoint Study (ACES) examines the effect of a low dose of aspirin on recurrent cancers, and is in its phase 4 stage of development. The National Cancer Research Institute is also in its phase II clinical trial to determine the effect of combined therapies of Difluoromethylornithine (DFMO/ eflornithine) with aspirin to see if there is a lower recurrence rate of cancers, specifically colorectal cancer. Similarly, the ASCOLT trial is testing to see if 200 mg of aspirin per day for 3 years can improve “disease-free or overall survival” in patients previously treated for colorectal cancer. The ASPREE trial is currently enrolling healthy participants, aged 65 years or older to determine whether the overall benefits of taking aspirin for 5 years, such as prevention of heart disease, stroke, cancers, etc, can outweigh the associated risks. Many studies explore similar ways of using aspirin as an isolated mechanism for cancer therapies, as well as a combined method of reducing the likelihood and reoccurrence of cancerous growths.
If you think taking aspirin as a preventative measure might be appropriate, schedule a conversation with your doctor.

Resources:
http://www.ncbi.nlm.nih.gov/pmc/articles/PMC1994795/
http://www.cancer.gov/cancertopics/research-updates/2014/aspirin http://www.cancer.gov/clinicaltrials/search/view?cdrid=754049&version=HealthProfessional&protocolsearchid=13373041
The Journal of Simplified Cancer Research (JSCR) is the official journal of Cancer Research Simplified. For only $4.99 per monthly issue, [or a discounted $49.99 per year], you can gain digital access to straightforward information and articles on cancer news, diagnosis, prevention, treatment, and clinical trials. Fill out the form, make your payment, and you'll receive your copy right in your inbox! To get your copy now on The Journal of Simplified Cancer Research (JSCR) page.