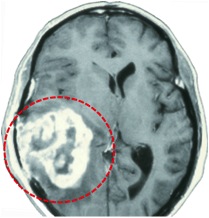 Glioblastoma consists of malignant (cancerous, growing) cells that form tumors from the star shaped glial cells, called astrocytes, which make up the supportive tissue of the brain. Glioblastoma (GBM) is a Grade IV Astrocytoma (as it arises from astrocyte cells) and is the most common, most deadly, and most aggressive type of brain tumor in adults. Despite multimodal treatment with surgery, radiotherapy, and chemotherapy (temozolomide), the survival time is usually between16 to 19 months. Similar to other cancers that arise from their tissue of origin, since Glioblastomas evolve from normal brain cells, the tumors can easily live within normal brain tissue, hidden from immune recognition and response. Similarly, due to their access to the vast network of blood vessels in the brain, and due to the fast production rate of these abnormal cells, Glioblastomas are highly cancerous and can spread throughout the brain quickly. Similarly, Glioblastomas are particularly difficult to treat because they are made up of many different cell types, which may respond differently to different types of therapies.

EGFRvIII is a tumor specific oncogene, a gene that may cause or amplify cancer growth. It is expressed in about 30% of glioblastoma tumors and is a mutation in the epidermal growth factor receptor, EGFR, a protein that increases cancer cell growth. Expression of EGFRvIII not only correlates with increased tumor growth in a single cell, but can also release microvesicles, fragments of membrane that contain EGFRvIII to nearby cells, further increasing tumor growth on an amplified level. Since EGFRvIII is associated with extremely poor outcomes, is mostly found in tumor cells, and is absent in normal tissues, it is a good target for treatment in the brain. 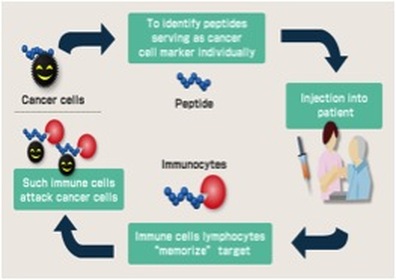 Rindopepimut (Rintega(R)) is an immunotherapy treatment under investigation, which works by targeting EGFRvIII, and reducing its ability to contribute to cancer growth. Rindopepimut is a peptide vaccine that binds to the corresponding 13-amino acid (molecules that make up proteins) “mutant vIII epitope,” which is connected to a carrier protein, KLH (for antibody production), which stimulates the immune system. Peptide vaccines are rapidly cycled and degraded in the body and therefore have minimal deleterious side effects. Peptides are naturally occurring biological molecules, which are made up of short chains of amino acids bonded together by peptide bonds (amine bonds). This peptide vaccine Rindopepimut, consists of using a peptide from the original pathogen, the cancer producing tumor in this case, to stimulate an immune response to fight the tumor. With the three Phase 2 trials of Rindopepimut (ACTIVATE, ACT II, and ACTIII) that have been carried out, the vaccine has been shown to inhibit the growth of EGFRvIII- expressing tumors in mouse models, suggesting that Rindopepimut has the capacity to improve both overall survival, and average survival without any progression of tumors. The vaccine seemingly initiates such a large immune response that 67% of patients who received Rindopepimut injectionss for 3 months or longer showed no visible expression of EGFRvIII.  In addition, a Phase 3 study is underway, ACT IV, in newly diagnosed GBM, and a Phase 2 study, called ReACT for recurrent GBM patients. These studies are showing promising results, with noticeable increases in immune responses and health outcomes after just 3-4 months. These developments represent exciting steps in a process for immunotherapy to play a greater role in improving health outcomes, and especially for enabling immunotherapy treatment in brain cancer.
FDA Breakthrough Therapy Designation

As Rindopepimut has shown improvement in clinical outcomes over available therapy options, the FDA intends to speed up the development and review process of this drug through a “Breakthrough Therapy Designation.” The Breakthrough Therapy designation aims to accelerate the progress, analysis and review of Rindopepimut, which has the capacity to make huge advances in the treatment of such a severe and life threatening condition such as GBM.
Resources:

http://www.neuros.net/es/images/glioblastoma_multiforme_RM.gif
The Journal of Simplified Cancer Research (JSCR) is the official journal of Cancer Research Simplified. For only $4.99 per monthly issue, [or a discounted $49.99 per year], you can gain digital access to straightforward information and articles on cancer news, diagnosis, prevention, treatment, and clinical trials. Fill out the form, make your payment, and you'll receive your copy right in your inbox! To get your copy now on The Journal of Simplified Cancer Research (JSCR) page.