By Elana Meer and Ayguen Sahin, MSc, PhD | Cancer Education and Research Institute (CERI) - CEO and Founder
More details of this article can be found in our JSCR Journal - Issue October 2016
Neuroblastoma is a disease derived from cancer cells forming in nerve tissue involved in the sympathetic nervous system, which cells may originate in nerves along the spinal chord, in the hormone making adrenal glands, nerve clusters at points along different nerve fibers (1) as well as in immature nerve cells in the neck, chest, abdomen, and spine (2). It typically occurs in children younger than 5 years old, and can result from a gene mutation from the parent (3). Neuroblastomas grow at different rates with about half of them being high-risk Neuroblastomas, more aggressive tumors with a greater chance of tumor reoccurrence and uncontrollable growth, that tend to be unresponsive to treatments (4). 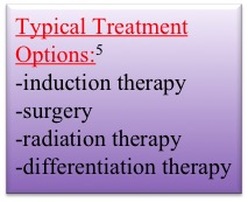 High-risk Neuroblastoma Treatment and Dinutuximab
High-risk neuroblastomas, characterized by fast and uncontrollable tumor growth and recurrence, prove to be the most difficult, and complicated types of Neuroblastoma to treat, requiring a combination of different treatment options for the best result (6). The general treatment starts off with induction, consisting of five rounds of chemotherapy injected into a vein into the bloodstream (6). This treatment aims to reduce the size of the tumor to enable its removal through surgical methods. The next step in treatment may be surgery to remove the original tumor, the timing of which depends completely on the specific characteristics of a patients’ tumor progression. Radiation therapy can also be used as a treatment (6). By targeting cancer cells with large amounts of x-rays, it aids in killing the neuroblastoma cells that remain after induction chemotherapy and surgery. However, radiation therapy can damage nearby healthy tissues producing long-term dangerous side effects. After induction, surgery, and radiation therapy have been attempted without the desired improvements, immunotherapy can be considered. 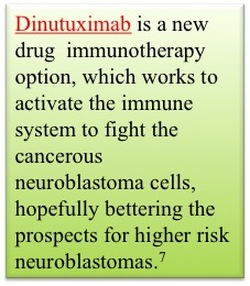 Dinutuximab, an example of an immunotherapy treatment option, has just been approved by the US Food and Drug Administration for treatment of patients with High-risk Neuroblastoma (7). As cancer cells grow and spread, they weaken the immune system so that it can no longer attack the harmful growing tumors. In a healthy state, the immune system forms proteins, antibodies, which attack foreign bacteria and viruses. These antibodies; however, are not able to fight a Neuroblastoma as this tumor is a part of the child’s body and is therefore not seen by the immune system as a foreign and dangerous invader. Infusions of immunotherapy treatment can help the immune system to find and get rid of the Neuroblastoma cells that have evaded chemotherapy and radiation therapy. Dinutuximab is a monoclonal antibody, a molecule chemically engineered to stick onto the abnormalities of the cancer cells (7). These types of antibodies act like the antibodies regularly produced by your immune system to fight off infections and other invaders that might jeopardize your health. Dinutuximab sticks onto GD2, which is a factor expressed on tumors of human Neuroblastomas, and after binding, it can initiate the break down of the tumor cells. 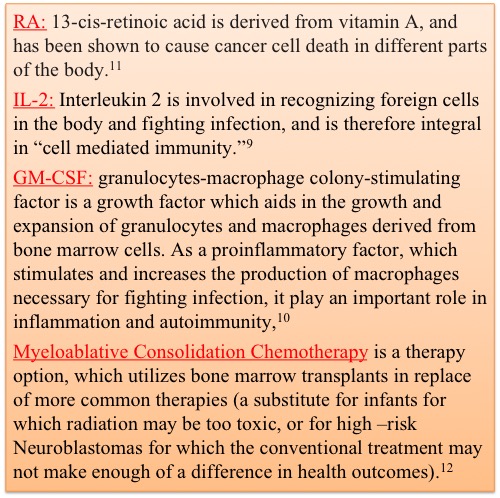 ​The Research/Trials
In lab, Dinutuximab proved very successful at diminishing tumor size, growth, and reoccurance when used in conjunction with RA, IL-2, and GM-CSF (8). This trial randomized 226 patients from 11 months old to 15 years old, and gave half of them the dinutuximab/RA combination treatment, and the other half the RA treatment alone. Prior to any treatment, all patients had received chemotherapy, surgical resection, myeloablative consolidation chemotherapy followed by autologous stem cell transplant, and radiation therapy. The Immunotherapy had better results than the standard therapy as the event-free survival, defined as the time from the randomized treatment to disease progression, was around 66% in those with the immunotherapy treatment and around 46% in those with the standard treatment at the 2 year mark (8). Similarly, overall survival was around 86% in the immunotherapy treatment group, and only 75% in the RA only treatment group, further suggesting the potential efficacy of immunotherapy combination treatments for high-risk neuroblastoma (8).