A new Immunotherapy drug for Acute Lymphoblastic Leukemia (ALL): Blincyto
By Ayguen Sahin, MSc, PhD and Jenna Newman | CERI
More details of this article can be found in our JSCR - April 2015 Issue

What is Acute Lymphoblastic Leukemia (ALL)?
Acute Lymphoblastic Leukemia (ALL), also known as Acute Lymphocytic Leukemia (ALL), is a type of cancer that arises when lymphoid blasts (lymphoblasts), a type of immune system cells, which are immature white blood cells, become abnormal and divide rapidly. This type of Leukemia is different than Acute Myeloid Leukemia (AML), which arises from another blood cell type in the bone marrow, called myelocytes or myeloid blasts (see Figure 1.)
When these cells divide uncontrollably, they outcompete healthy cells in the blood, such as red blood cells (which carry oxygen to cells throughout the body) and platelets (which play a major role in blood clotting to prevent continuous bleeding). Without room to grow, the number of red blood cells, normal white blood cells, and platelets in the blood decreases to lower than average, causing the symptoms associated with ALL.

What are the symptoms of ALL?
The following symptoms, which are very general and could be linked to many other conditions, may be associated with ALL. 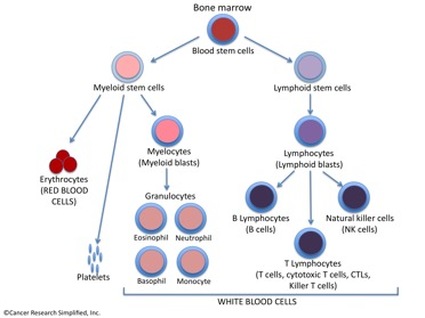 Figure 1. All elements of the blood, including immune system cells, arise from hematopoietic (blood) stem cells in the bone marrow.
​How has ALL been historically treated?
Historically, drugs used for ALL have been chemotherapy treatments designed to kill cells that are rapidly dividing. The problem with this type of treatment is that all cells that have fast rates of division and growth, which include healthy cells such as those in the intestinal lining and the cells from which hair grows, are targeted. This means that, aside from experiencing the side effects of hair loss and digestive problems, cancer cells are not being targeted for being cancer cells. In other words, cancer cells are being killed with these treatments just because they divide, not because of the specific properties that make them cancerous. Treatments in development today focus on finding out about what makes cancer cells different from other cells, and using this knowledge to find drugs that specifically kill cancer cells. This approach is thought to be an improvement over nonselective chemotherapies that do not always efficiently kill all cancerous cells, and have notable side effects. 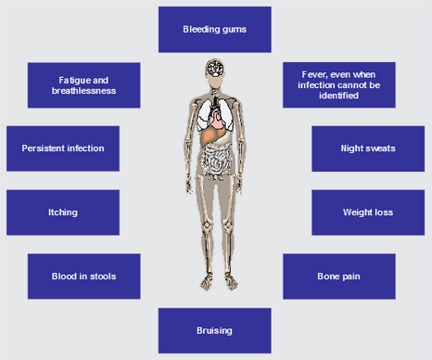 Figure 2. The symptoms of ALL are summarized in the picture above. Some of these symptoms are observed in conditions other than ALL. A patient should not make assumptions about what these symptoms may mean and should see a doctor for an official diagnosis. (picture by: www.allaboutall.net)
​What are some new treatments that will help ALL patients?
In late 2014, the Food and Drug Administration (FDA) of the United States, a government agency that determines whether drugs are safe for consumers and effective in treating disease, approved a drug named Blincyto. Blincyto, as called on the market, is also known by its longer chemical name, blinatumomab. Blincyto belongs to a category of new drugs called immunotherapy drugs. The immune system, which is designed to detect differences between human cells and abnormal cells or viruses associated with infectious agents, can be taught to recognize the differences between healthy human cells and human cancer cells, a task that it sometimes has trouble with on its own. This is due to the fact that tumors have the ability to ‘trick’ the immune system, which leads them to remain unrecognized and thus not eliminated. Different types of of immune system cells  have chemical signatures that set them apart from each other. The cells that come to dominate in ALL, cancerous immature lymphoid blasts (lymphoblasts), have molecules on their surface, called CD19, which are characteristic of immature lymphoid blasts that lead to the development of B cells (see box). Blincyto has the ability to bind to CD19 and CD3, a chemical signature of cytotoxic T cells (a.k.a. CTLs or killer T cells) (see box), cells that can destroy the cancer cells. With the ability to attach to cytotoxic T cells and cancer cells, Blincyto brings together cytotoxic T cells and cancer cells so that cytotoxic T cells are close enough to recognize and destroy the cancer cells. CD19 is expressed in B cells. B-cell ALL patients (about 50% common, about 10% pre-B cells) will have cancerous cells that have the CD19 molecule on their surfaces; this treatment will only be effective in these patients. ALL may also arise in T cells (about 15-25% of the cases), however, since CD19 is only expressed in B cells, treatment with Blincyto may not be effective in these patients.
​How do scientists and physicians know that Blincyto works?
In order to see whether Blincyto improved patients’ conditions and did not present major safety issues, physicians tested the drug on participants in a process known as a clinical trial. B-precursor ALL patients have traditionally had a poor prognosis, with survival rates of just a few months. In a study of 36 patients with B-precursor ALL, 69% of patients entered complete remission, meaning that the cancer cell count of these patients decreased enough to cause cancer symptoms to disappear. Patients receiving Blincyto lived for an average of 7.6 months after taking this treatment; this is an improvement over the average survival rate range of 2-8 months. Although Blincyto may not completely kill all cancer cells and may not prevent cancer from ultimately resurfacing, it is a great achievement for medicine with its potential to prolong lives. In the future, immunotherapy approaches to treating cancer are expected to become more standardized and effective in combatting cancer.

Chiaretti, S. and Foà, R. T-cell acute lymphoblastic leukemia. Haematologica. 2009 Feb; 94(2): 160–162.
The Journal of Simplified Cancer Research (JSCR) is the official journal of Cancer Research Simplified. For only $4.99 per monthly issue, [or a discounted $49.99 per year], you can gain digital access to straightforward information and articles on cancer news, diagnosis, prevention, treatment, and clinical trials. Fill out the form, make your payment, and you'll receive your copy right in your inbox! To get your copy now on The Journal of Simplified Cancer Research (JSCR) page.