By Ayguen Sahin, MSc, PhD | Cancer Education and Research Institute (CERI) - CEO and Founder
More details of this article can be found in our JSCR Journal - Issue September 2016

Where does Sulforaphane occur?
The compund Sulforaphane glucosinolate is found in cruciferous vegetables. These vegetables include cauliflower, cabbage, garden cress, bok choy, broccoli, and brussels sprouts (see image below) (2).
Sulforaphane is released only after physically breaking the plant, such as eating, chewing, or puréeing. Upon damage of the vegetable, the enzyme (a biological molecule that catalyses – or accelerate – chemical reactions in the body) myrosinase transforms Glucoraphanin into Sulforaphane (see image below) (3). The richest source of sulforaphane are young broccoli sprouts and cauliflower. 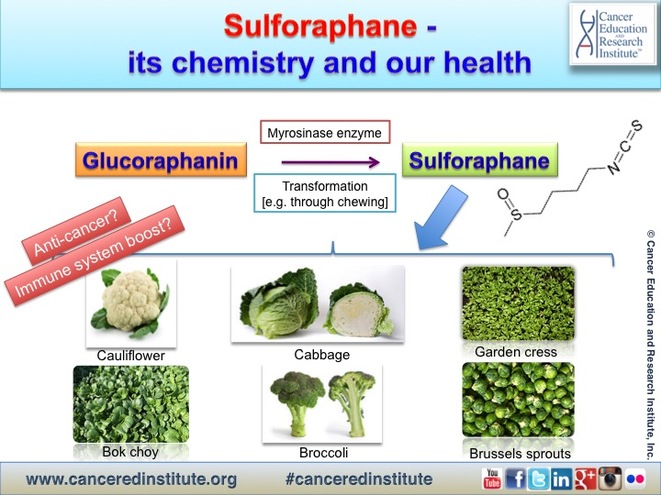 Many studies have supported the protective effects of broccoli and broccoli sprouts, a high source of suforaphane, against cancer. A recent study from 2016 found that sulforaphane treatment inhibits cell growth (proliferation) and induces cell death (apoptosis) in colon cancer cells, while exhibiting negligible toxicity toward normal (nonmalignant) colon cells. These observations were further extended into inhibitory effects against colon tumor growth in an animal model (4).

Sulforaphane can function by blocking tumor initiation step via inhibiting enzymes (the Phase I enzymes) that convert pro-carcinogens to carcinogens. Sulforaphane also induces other sets of enzymes (the Phase II enzymes), selectively inducing phase II enzymes without the induction of Phase I enzymes (1), detoxifying carcinogens and facilitate their elimination from the body. Upon the tumor initiation, sulforaphane can act via several molecular mechanisms that regulate proliferation (cell growth and expansion) and apoptosis (cell death) signals to suppress cancer progression (5).

A recent study published in the journal International Journal of Oncology in 2015, showed that sulforaphane inhibits human colon cancer progression and cancer cell angiogenesis by inhibiting the hypoxia inducible factor-1α (HIF-1α or HIF-1a, see below) and the hypoxia-induced vascular endothelial growth factor (VEGF, see below) expression (6).

Recent research into the effects of sulforaphane on cancer stem cells (CSCs) has drawn lots of interest. CSCs are suggested to be responsible for initiating and maintaining cancer, and to contribute to recurrence and drug resistance. A number of studies have indicated that sulforaphane may target CSCs in different types of cancer through modulation of NF-κB, SHH, epithelial-mesenchymal transition and Wnt/β-catenin pathways. (reviewed in 9)

A study published in 2010 in the journal Clinical Cancer Research showed that sulforaphane inhibits breast CSCs and downregulates the Wnt/beta-catenin self-renewal pathway. (10)

A study, published in 2002 in the journal PNAS, showed that sulforaphane inhibits extracellular, intracellular, and antibiotic-resistant strains of Helicobacter pylori and prevents benzo-a-pyrene-induced stomach tumors (11)

Another important point is to mention that combination therapy with sulforaphane and chemotherapy in preclinical settings has shown promising results. (9)

Sulforaphane and other health benefits
Heart health, diabetis, obesity, and autism
Sulforaphane is not only important for cancer cell elimination and cancer prevention, but also has other health benefits: it helps prevent diabetic cardiomypathy (a disorder of heart muscle in diabetic people) (15) and helps protect against ischemic injury of the heart through an antioxidant pathway (16). In a recent study, sulforaphane has been found to improve the insulin responsiveness in an diabetic animal model (17). In another recent study, sulforaphane decreased obesity by inhibiting adipogenesis [a process by which fat cells differentiate from pre-dadipocytes to adipocytes (fat cells)] in an obese animal model (18). In a recent study from Harvard Medical School, Massachusetts General Hospital, published in 2014 in the journal PNAS, sulforaphane, derived from broccoli sprouts, showed substantial declines in symptoms (improvement of behavior) of Autism Spectrum Disorder (ASD) patients compared to the placebo group (19).